A brief history of Lincoln County

As early as the mid-18th century, settlers from areas of Pennsylvania, Maryland, Virginia, and South Carolina, primarily of the German and Scots-Irish persuasion, flocked to this area to take advantage of the inexpensive land and rich farmland prevalent in the Carolina backcountry.

Traversing the rugged terrain of the Blue Ridge Mountains and the Staunton River Gap along the “Great Philadelphia Wagon Road,” these immigrants established their settlements throughout Lincoln County. On their trip, they brought traces of their native homelands in the forms of speech, behavior, religious beliefs, art, and written and oral traditions.

Lincoln County was named in honor of Major General Benjamin Lincoln. Lincoln, originally from Massachusetts, was the commander of the Southern Department of the Continental Army and received the official British sword of surrender at Yorktown. After the Revolutionary War, he went on to become the Secretary of War in 1781, and suppress the potentially disastrous uprising known as Shay’s Rebellion in 1787. He never visited the area.

On April 19, 1779, Lincoln County commenced government. The initial county was 1800 square miles and one of the largest in the state. It included a large portion of today’s Cleveland County and all of both present-day Gaston and Catawba counties. The county was partitioned in the 1840s, and today’s county is 307 square miles, extending in the form of a long rectangle measuring 30 miles in length and 10 miles wide.

Bordered by the Catawba River to the east, Cleveland County to the west, Gaston County to the south, and Catawba County to the north, Lincoln County retained a rolling terrain with plenty of creeks and streams to contribute to economic development.

The township of Lincolnton was established as the county seat on December 29, 1785. It was laid out with a central courthouse surrounded by a grid plan of streets, blocks, and lots with four primary streets – East Main, West Main, North Aspen, and South Aspen – leading from the courthouse and dividing the town into quadrants. Over time, development filled the original grid plan, expanded it, and eventually moved beyond it while maintaining the four principal arteries like compass points. 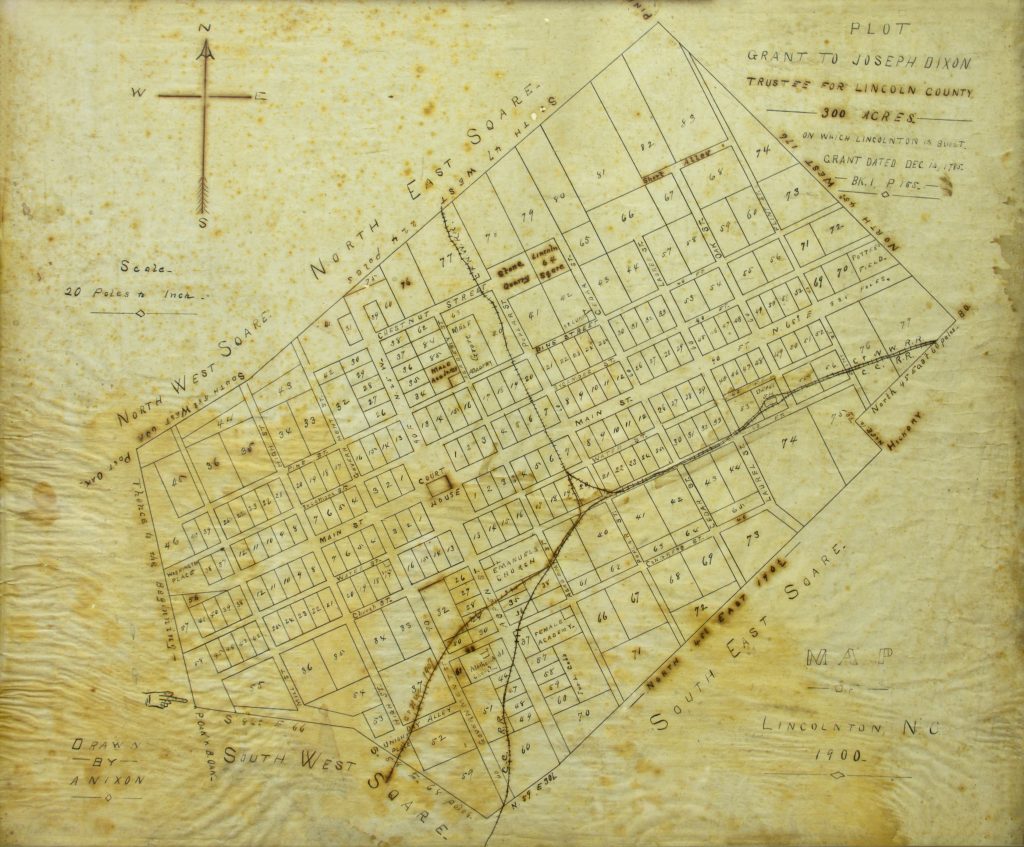 This drawing by local historian Alfred Nixon, clearly demonstrates the grid pattern and compass point design of the city with the courthouse as the central focus.